“Like a number of my former teammates, I came to the University of Tennessee from another country. I was recruited to be a part of the Diving Team by Coach Dave Parrington. It didn’t take long for me to build an incredibly strong relationship with Dave (as well as the other coaches on the Swimming and Diving Team), who I quickly realized was not only a master of his craft, but a friend and mentor for many things outside of the pool. When I think about why that bond formed so quickly, I think of the amount of respect Dave has for all his athletes, particularly the respect he showed the women on his team. Dave held myself and my teammates to a high standard, one that was expected when you were a part of a group such as the Lady Vols. Dave didn’t even need to explain to me why that was, I felt it from the moment I set foot in Knoxville as a freshman and was welcomed with open arms by the Lady Vols…across all sports. Knowing absolutely nothing about the recruiting process for collegiate athletics in the USA, I dove right into the deep end (pardon the pun) and quickly had to adapt to my new life in this new world. The Lady Vols taught me how to become a part of something greater than myself, that opportunities were abundant and if we worked hard enough, we could be anything we wanted.

From my experience as a Lady Vol, there wasn’t a single pool deck we would walk onto where our competitors wouldn’t feel our presence. We were widely respected and appreciated by everyone, including our biggest rivals. Academically, it was expected that you tackled your grueling schedule with integrity and to never forget that being a Lady Vol was so much more than being great at your sport. Lady Vols enriched themselves with an education, they prepared for the working world by building a work ethic that couldn’t be beaten.

The year this photo was taken was the last season the Lady Vol Swimmers and Divers competed as “Lady Vols”. The following year, they all competed together under “Tennessee.”

After reading the letters from my fellow Lady Vols and Vols, I knew I could write many pages of what it means to be a Lady Vol, how it was a life changing experience, how taking away the logo is heart breaking. These letter show me that taking away the Lady Vol logo is an injustice on so many levels, and that it isn’t just a girl thing. We had a positive impact on everyone on campus, male and female, athletes and non-athletes, and I believe that impact had 100% to do with the culture that was created and expected from us Lady Vols.

I keep trying to understand why it makes sense to change something that wasn’t hurting anybody. A symbol that brought nothing but positivity and was a symbol that represents everything I, as a woman, strive for? Just like the color Orange is not just a color, the Lady Vol logo is not just a logo. Like everyone else who has written letters, I hope mine makes enough of a difference to change the course of the decision to nix something so historic, that came from such important roots. If not, I can’t say I’ll be proud of the Athletic Department that chose to ignore us and what we represent.” 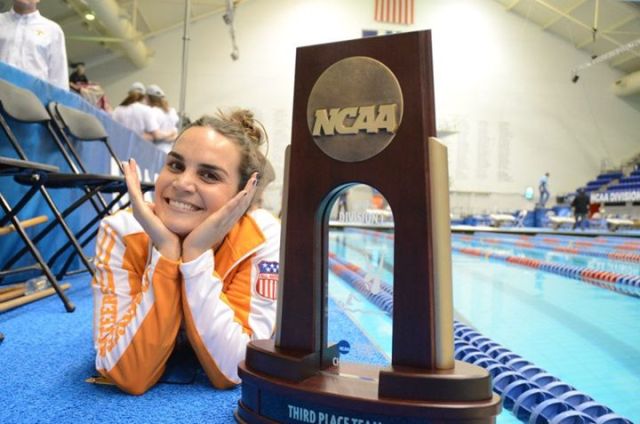 Jodie’s senior season, when her and her team captured Third Place overall, the best they had ever finished at NCAAs.